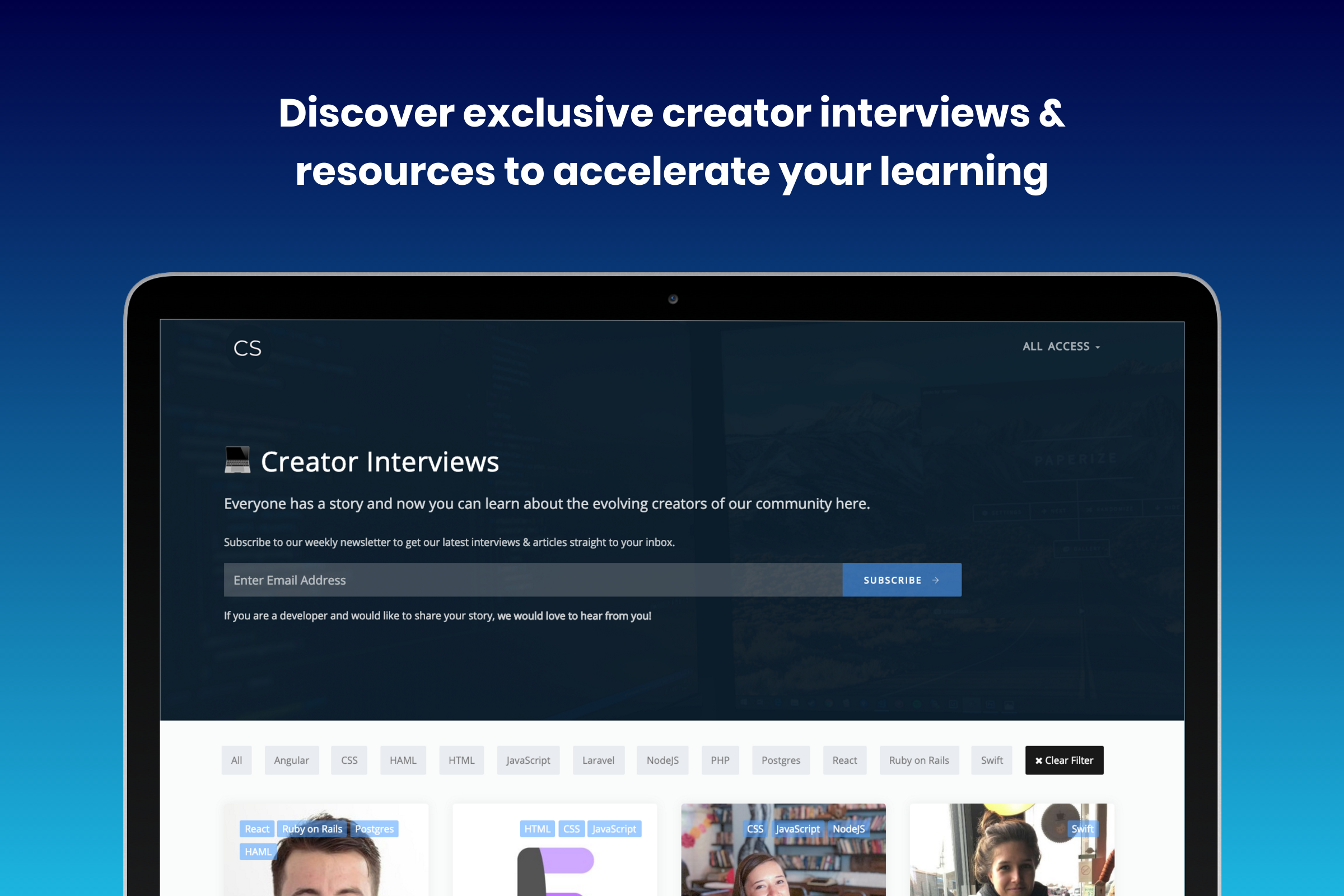 As some of you may know, CoderStory was originally launched as an MVP during the #24hrstartupchallenge. The idea originated as a content driven website where people could read interviews from experienced developers and creators from across the world.

Born from the personal struggles that I had faced when learning to code over the last 4 years. I often found that I was following tutorials, building what they teach you but struggled to make the transition to work on my own projects and ideas. Often the problem was that I had no idea how to even start or the thought process to building an application. It’s a lot more common than you think. I cannot fault the developer community because they are incredibly supportive, however I didn’t feel I knew anyone that I could go to where I wouldn’t feel like a burden or feel like I was asking ‘stupid questions’.

Following the challenge I had incredible feedback which continued to push me on pursuing the idea once it was over. In the weeks that followed the challenge, I started to brainstorm and map out ideas on how I wanted to move forward with the site. It’s not an easy job to manage a content driven website particularly when your skill set isn’t as a writer or marketer. However, I persevered and made a decision to bring my older brother Ben on board the team. Ben helps with all the content and marketing side of things which has provided me with the opportunity to improve CoderStory from a feature perspective.

Let’s start by taking it back to where it all began: The Challenge.

I still remember it as if it was yesterday, it was probably one of the most exciting but most exhausting days of my life. In retrospect, I was incredibly unprepared for the event - only thinking of the idea less than a week before we were supposed to complete the challenge.

When the event was initially announced by Pat, I made an excuse about how I couldn’t do it because I didn’t think that I was technical enough to complete. I realised pretty quickly that it wasn’t a good excuse and that if I really wanted to push myself then I needed to rise to the challenge.

In the days leading up to the event I started reaching out to a few developers and creators that I knew within the community and asked if they would be willing to do an interview for CoderStory. Without them the site never would have been a hit like it was! Being completely honest - although I had read all the interviews prior, I was in such a rush that I never got the opportunity to make any grammatical changes or fix any spelling. I eventually went back and made all the updates - but it was a funny experience looking back.

The day itself felt like it lasted forever - my stream lasted approx 16 hours which felt like a lifetime. The main reason was that I had not looked after myself - I did not eat properly, or take regular breaks or even keep myself hydrated. I was pumping my body full of sugar and caffeine, which made me crash all throughout the day. Lesson learnt: Priortise your health!

Here’s just a couple of numbers from the stream:

The unexpected turn happened after the event. I had incredibly positive feedback from the community and even strangers through Twitter. An even greater shock was that CoderStory placed #7 out of the 96 products developed that day, I couldn’t believe it. This resulted in $250 prize money which is being saved for a rainy day to utilise on CoderStory.

What has happened since the 24hrstartup challenge?

In the following 6 weeks after the launch, I was still working on publishing new interviews whilst starting to brainstorm the future of CoderStory with my creative partner Ben (@benwallaceuk).

We started to map where we wanted to take CoderStory from both a creative and technical standpoint. We decided that we wanted to keep the focus on interviewing developers but dive into more depth. As you’ll see from some of the interviews, we started to adapt our questions and became more descriptive on what we asked from interviews. This provided real in-depth writing from the creators and really gave a deep insight into their experiences in the both the creator and technology space.

However, we didn’t want to stop at interviews. We wanted to add a blog into CoderStory to bring insights and opinions from within the industry to help cultivate and expand our readers growing knowledge bases. Until this point we had been posting our content on Medium, but we thought that we should be driving our readers to our own site not a third-party!

And I cannot forget about our new Resources section. We want to become your one stop shop for knowledge and want to help you grow your learning mind. We are highlighting the best resources to help you maximise your potential, although not all our strictly technology - we want to help you not only in your career but life too.

Moving forward, we have added a Roadmap feature which will enable you to vote on what you’d like to see in future developments and provide feedback on the things you like and don’t like!

We’ll continue to update our progress throughout the year as we take more steps to becoming an engaged community.

P.S This whole post was written during a live stream (https://www.twitch.tv/jesswallaceuk)